Suppose we want to calculate the integral

However, in many other situations, even sampling from $f$ is not possible or inefficient. Importance sampling can be used to overcome this limitation if there is another distribution $ q $ that satisfies the following conditions:

Of course, importance sampling is not a panacea. In fact, it can go seriously off. To see why this is so, let $ \theta = \int_{\mathcal Y}g(y)f(y) dy $ and assume that the draws from $ q $ are independent. Then the variance of the estimator $ \hat\mu_{\text{IS}} $ is

So, consider another approach (which will turn out to be a bad choice). We might try to exploit the fact that the normal distribution is symmetric and write

and we can use importance sampling with:

where $ \Phi(\cdot) $ is the standard normal cdf. Unfortunately, the result suggests that the “uniform trick” will result in an estimator with larger variance than $ \text{Var}_f[\hat\mu_{\text{MC}}]$, so this is not a good approach…

Here, we consider two distributions: the $ \text{Exponential}(\lambda) $ distribution with pdf

First, we load some packages.

The proposal distributions look as follows: 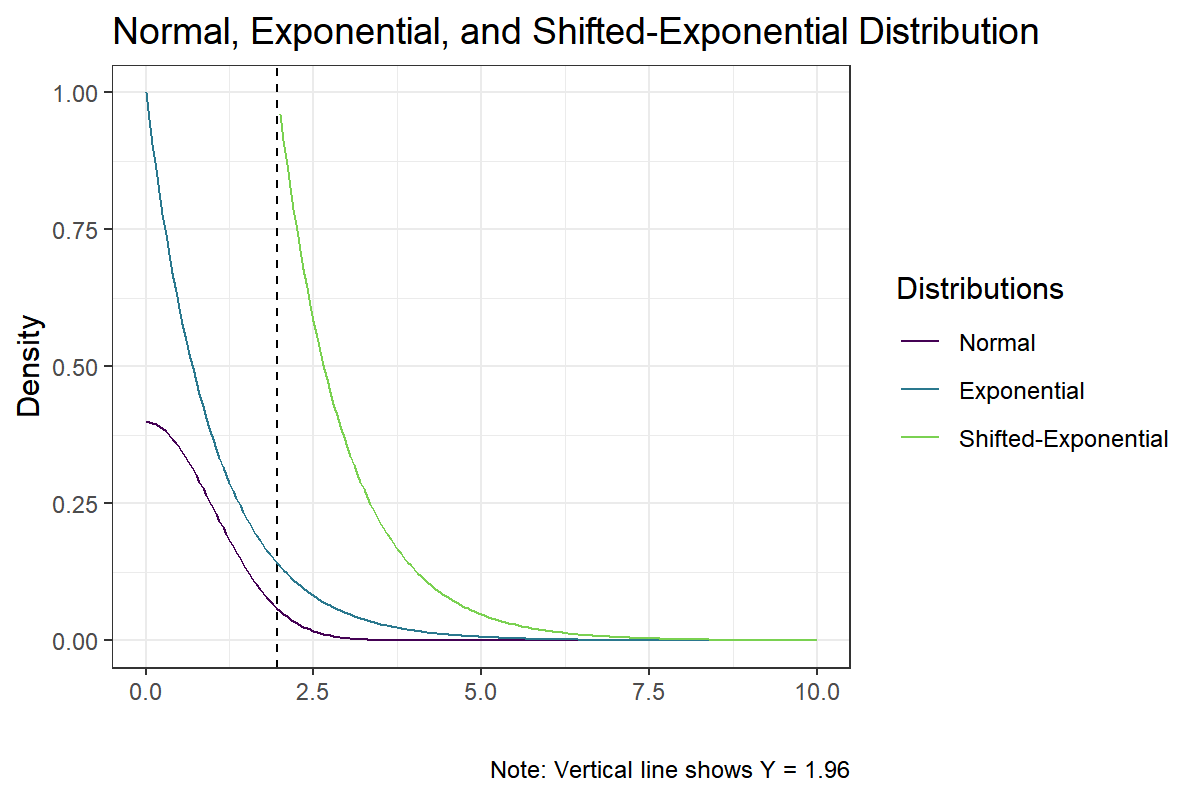 To compare the performance importance sampling using different proposal distributions, we can run a simple simulation. For all that follows, we draw n.draws = 1,000 samples from the normal and the proposal distributions and calculate the Monte Carlo estimate. We repeat this process n.sim = 5,000 times and calculate the variance of each estimator across the repeated runs.

Next, let’s plot the results 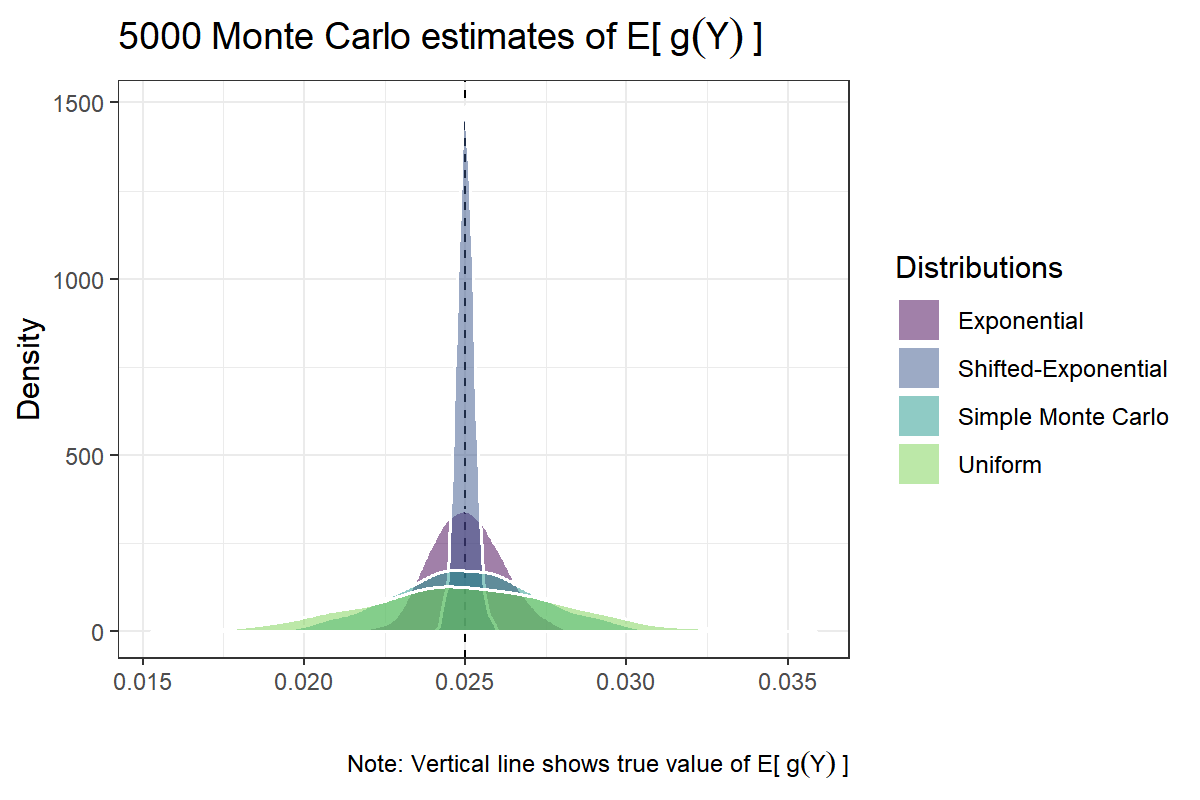 The results show how a good choice of the proposal distribution $ q $ can greatly reduce the variance of the Monte Carlo estimator. All estimators are concentrated near the true value of $ \text{E}_f[g(Y)] \approx .025 $. Also, consistent with our analytical results, the vanilla Monte Carlo approach performs better, in terms of variance, then importance sampling using the uniform distribution. Yet, importance sampling using the shifted-exponential distribution, by far, outperforms the other estimators. 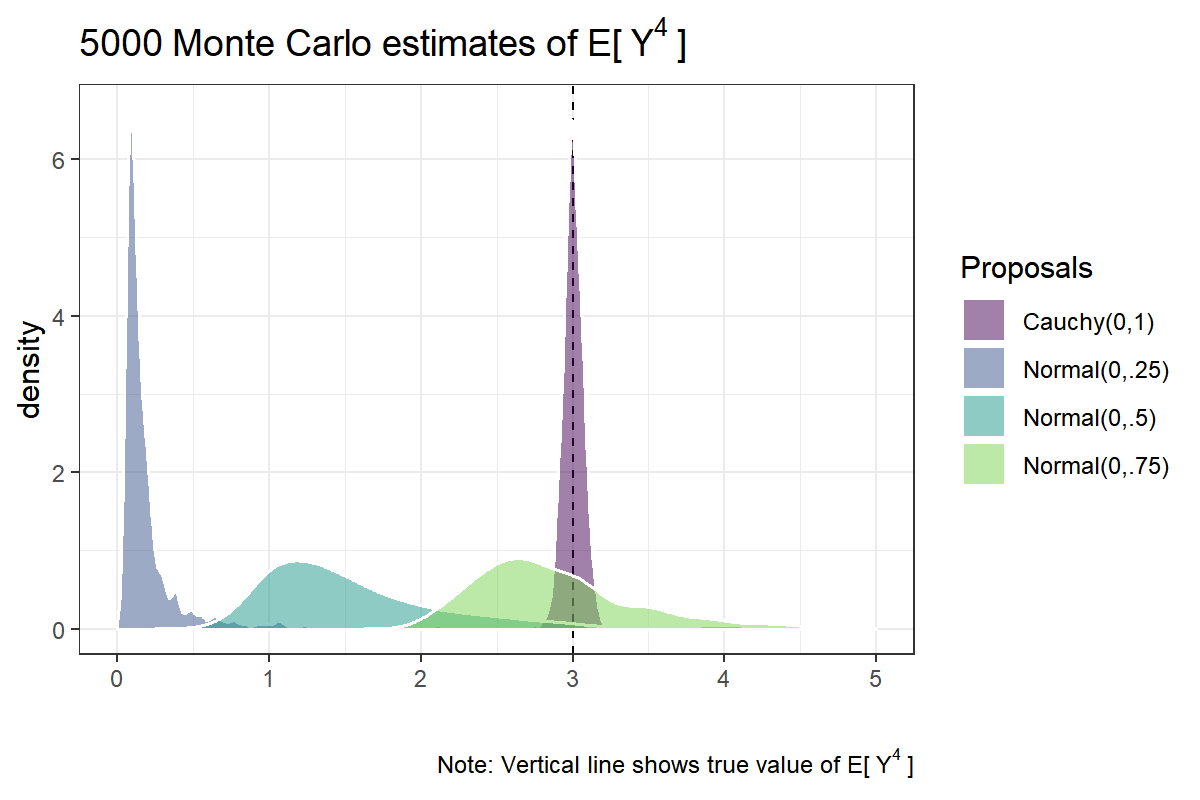 The estimator using the $ \text{Normal}(0,.75) $ as proposal seem to hit the mark, on average, but the distribution is still skewed with a median at 2.77. When we choose even narrower proposals, $ \text{Normal}(0,.5) $ or $ \text{Normal}(0,.25) $, the results are even worse. Only for the $ \text{Cauchy}(0,1) $ proposal is the importance sampling estimator behaving reasonably. What’s going wrong? Asymptotically, $ \hat\mu_{\text{IS}} $ should converge to $ \text{E}_p[g(Y)] $. This result holds true. The problem is that we will never have infinite samples; and in this example, even n.draws=5,000 seems not enough for the estimator to converge, except for the Cauchy distribution. 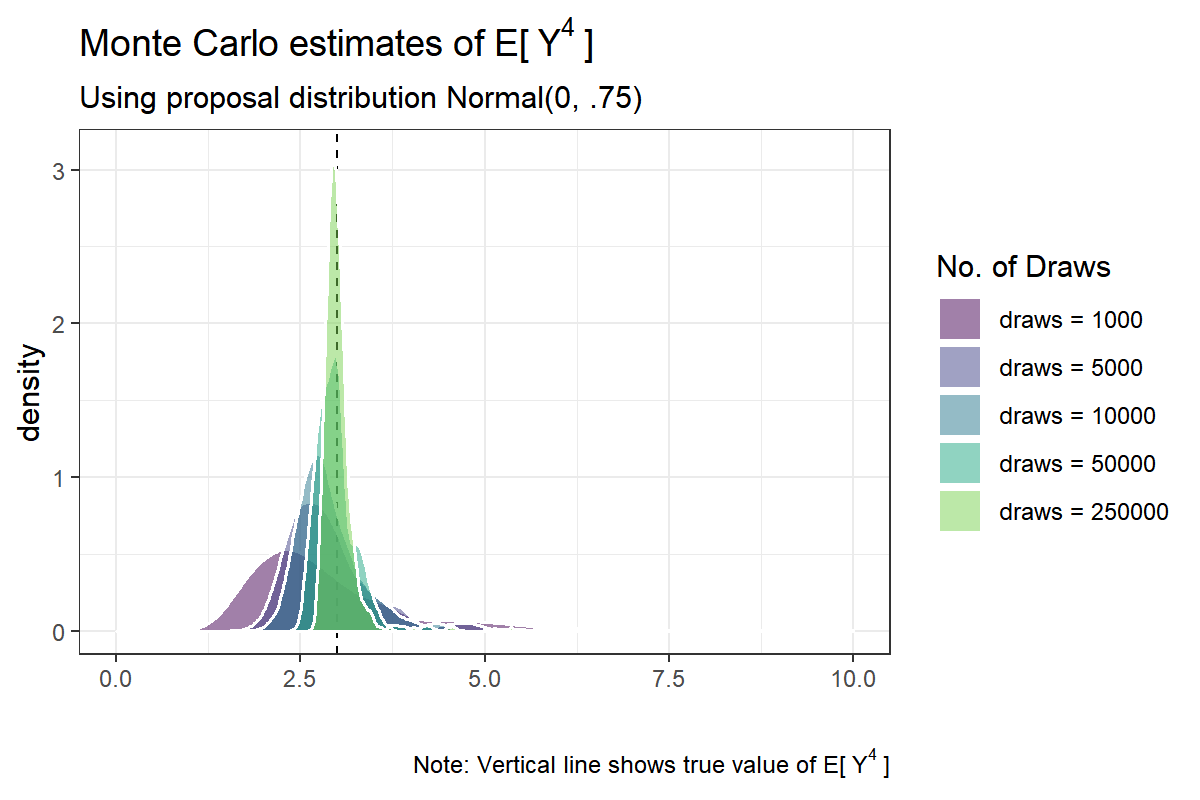 Even for $ 250,000 $ draws the distribution is slightly skewed. However, it is apparent from the plot that the familiar Central Limit Theorem is kicking in: namely the distribution of the estimator is slowly, but certainly, becoming bell-shaped with more Monte Carlo samples.

Notice also that even with n.draws = 1,000 the average over repeated simulation runs hits the mark, which is expected from a consistent estimator. The variance of the sampling distribution decreases with more draws as well. 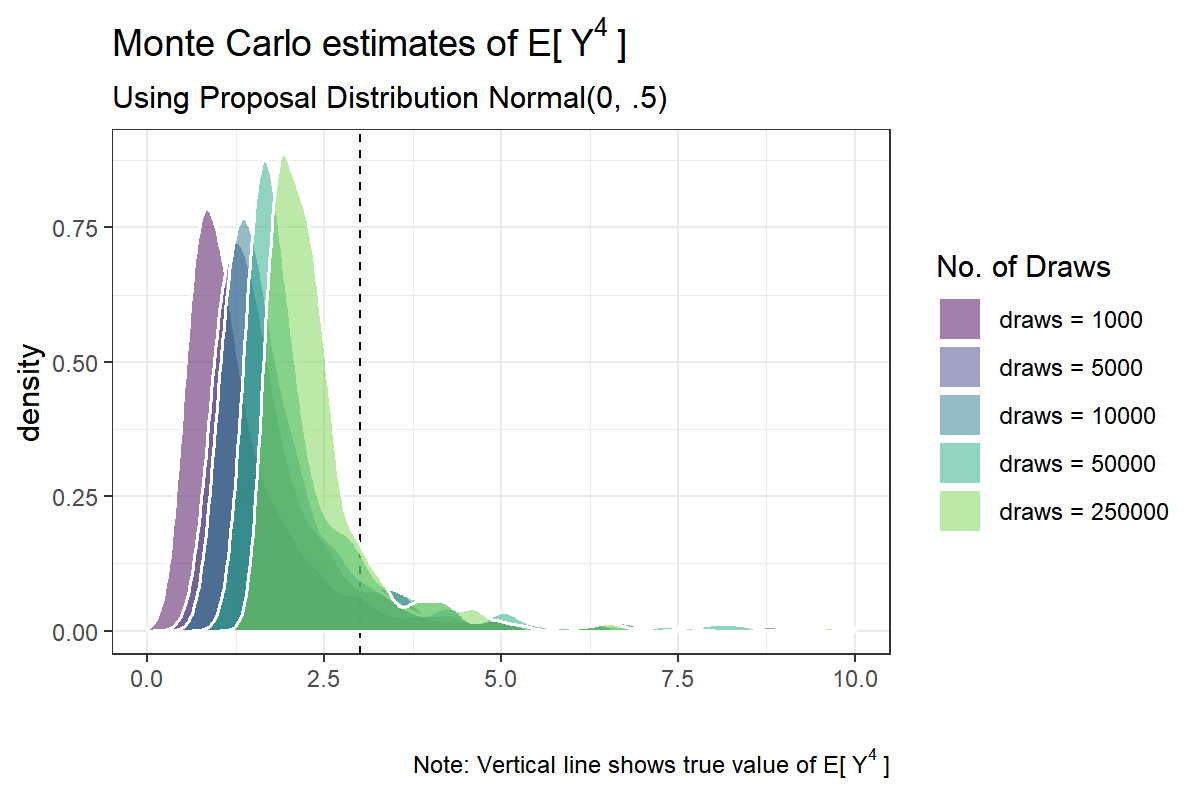 This doesn’t look good. The distributions are skewed and remain skewed even for n.draw = 250,000. As $ \hat{\mu}_{\text{IS}} $ is consistent, the average over simulation runs should become closer to the true mean as n.draws is increased. But the summary statistics indicate that even n.draws = 250,000 might not be enough. Further, although the distribution seems to move slowly towards its target, it is hard to discern whether the spread of the distribution is narrowing down, remaining stable, or becoming larger; the average across simulations is also hovering around the true value but varies quite a lot even with many MC samples.

where integration over $ \mathbb R $ is understood. Notice that this integral will be finite only if the exponent of the integrand is negative. This requires

I started this post with the intention to write about PSIS-LOOCV (Leave-One-Out Cross-Validation using Pareto-Smoothed Importance Sampling), which was proposed by A. Vehtari, A. Gelman, and J. Gabry as a method to compare the predictive fit of Bayesian models and which is implemented in the loo package. The post, however, has become too long, it seems. However, from the simulations above, it is possible to outline the idea of PSIS-LOOCV.

The key idea is to use posterior samples from the (pointwise) log-likelihood of a fitted model as the proposal distribution (“$ q $”) to approximate the distribution of the log-likelihood obtained using LOO (“$ f $”). It turns out that it is possible to obtain theoretically valid importance ratios based on the local independence assumption maintained under most models. However, the posterior distribution of the log-likelihood of the fitted model will be, in general, too narrow to serve as a good proposal distribution. This means that we are in a situation similar to the “failed” simulation case from above. Therefore, we need some smart way to stabilize the importance ratios. This is done in PSIS-LOOCV by smoothing the ratios using the generalized Pareto distribution. Maybe I’ll have the opportunity to write about PSIS-LOOCV in a later post…

Previous: Misleading Textbook Example Next: Number of Four-cycles in Networks