This is the second post on the Metropolis-Hastings algorithm. While the first post was devoted to explain why the Metropolis algorithm works, here I am concerned with a common mistake that happens (it happened to me at least) when sampling from distributions that are defined on constrained spaces, most notably $\mathbb R_+$ or $[0,1]$.

Suppose we want to sample from the distribution of a positive random variable $X$ with a random walk Metropolis-Hastings algorithm. There is nothing wrong with using a proposal distribution that might result in negative proposals in this situation. The negative proposals are simply rejected and the sampler will continue to sample from the correct target distribution. A shortcoming of this approach, however, is that, sometimes, too many of the proposals will be rejected, rendering the sampler inefficient. Therefore, it is often sensible to specify a proposal that has to be positive as well, such as the Gamma or the Pareto distribution, or to transform the variable into an unconstrained space and use Normally distributed proposals on the transformed space. It is the latter with which I am planning to deal in this post.

The following example might illustrate the point. Say, we want to sample from a $\text{Gamma(3,1)}$ density (where we use the shape-rate parameterization) by using Normally distributed proposals with variance $\delta^2$, i.e., $x^\ast \sim \text{Normal}(x, \delta)$, where $x^\ast$ is the proposed value and $x$ is the current value at each iteration. The acceptance ratio is then

So, the Metropolis-Hastings algorithm might be coded up as follows. Notice we calculate the acceptace ratio on the log-scale for numerical stability.

The results show that the algorithm successfully approximates the target distribution: 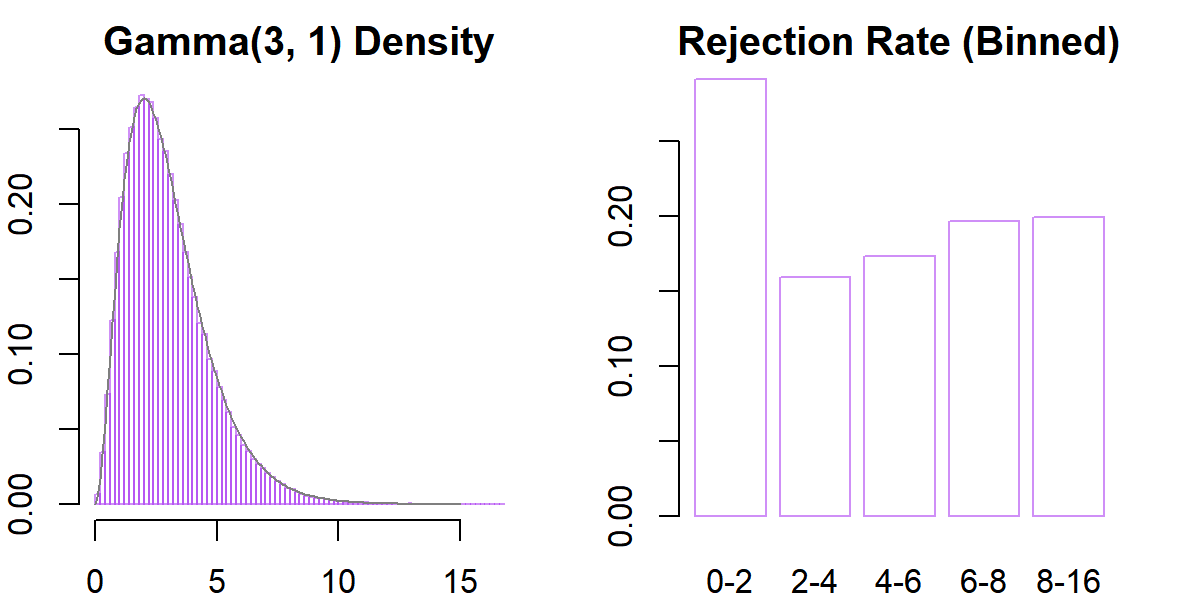 At the same time, however, we see that a lot of propsals near zero are rejected. This is expected: if the current state of the sampler is near zero, the next proposal will have a high probability of being negative, which leads to an automatic rejections. 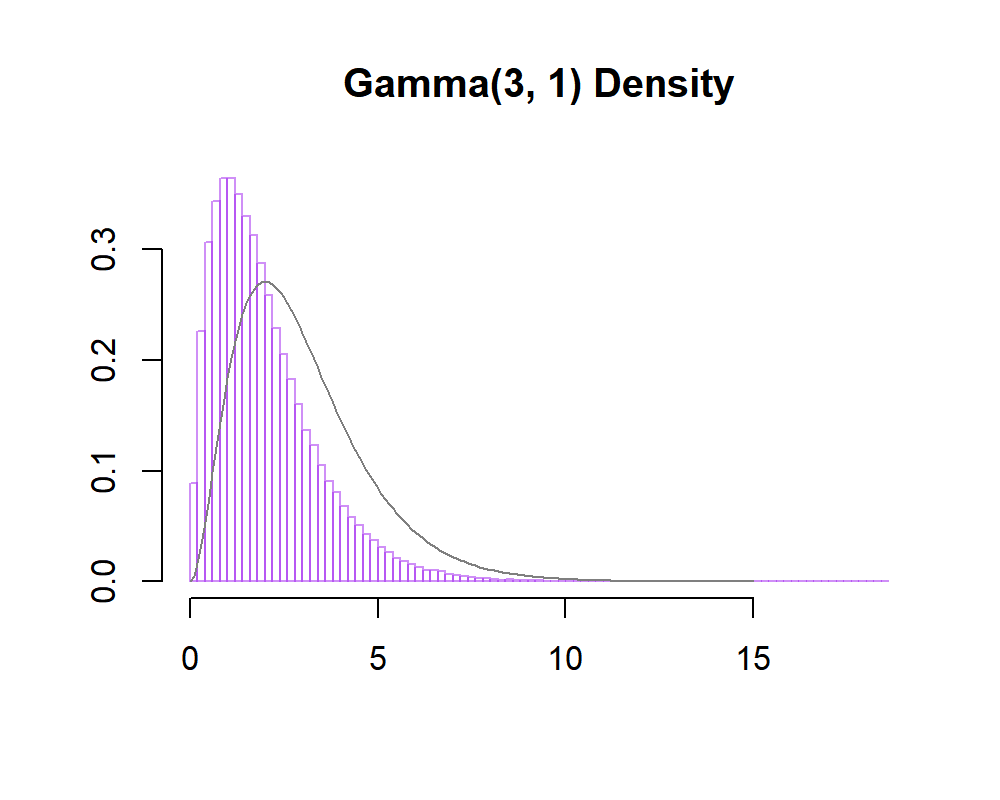 Yet, as the figure above shows, once we switch to the log-scale the sampler fails to sample from the traget distribution. The reason for its failure lies the fact that we have changed variables and forgot to adjust for this . In order to see where the algorithm went wrong, consider again the expression

To adjust for the change of variables, we can rely on a simple theorem about the distribution of functions of random variables. The general formula can be found in most introductory statistics textbooks and is based on a standard result in calculus. The version below is from Mood et al.’s introductory book with minor changes in notation:

Then $V = g(W)$ is a continuous random variable with density

The term that appears in the absolute value function is called the Jacobian of the transformation. Intuitively, the Jacobian of a function $f$ evaluated at the point $x$ can be understood as the amount to which a function stretches or contracts volumes near the point $x$. This also gives some intuition about why it appears whenever we want to change variables, either in the univariate context or the multivariate context.

Now, back to the problem. We know that the proposal $\log(x^\ast)$ is Normally distributed with mean $\log(x)$ and standard deviation $\delta$, but we are interested in the distribution of $x^\ast$. To align the notation with that of the theorem, let

The mapping that transforms $w$ to $v$ is the exponential function and its inverse is the logarithm. Thus, $g(w) = \exp(w)$ and $g^{-1}(v) = \log(v)$. The exponential function, indeed, defines a one-to-one transformation of $\mathcal W = \mathbb R$ onto $\mathcal V = \mathbb R_+$; and $g^{-1}$ is continuously differentiable with respect to $v$ and is non-zero on $\mathbb R_+$. So, all requirements to apply the change of variable formula are satisfied.

Applying the formua, we obtain

and we see immediatly that the Jacobian is the missing piece we’ve left out.

Lastly, to incorporate the Jacobian, we note that the acceptance ratio is calculated on the log-scale. So, we have to add (not multiply)

and $-\log(x^\ast)$, respectively, from the numerator and denominator in the acceptance ratio.

So let’s run the sampler again:

The results look as follows: 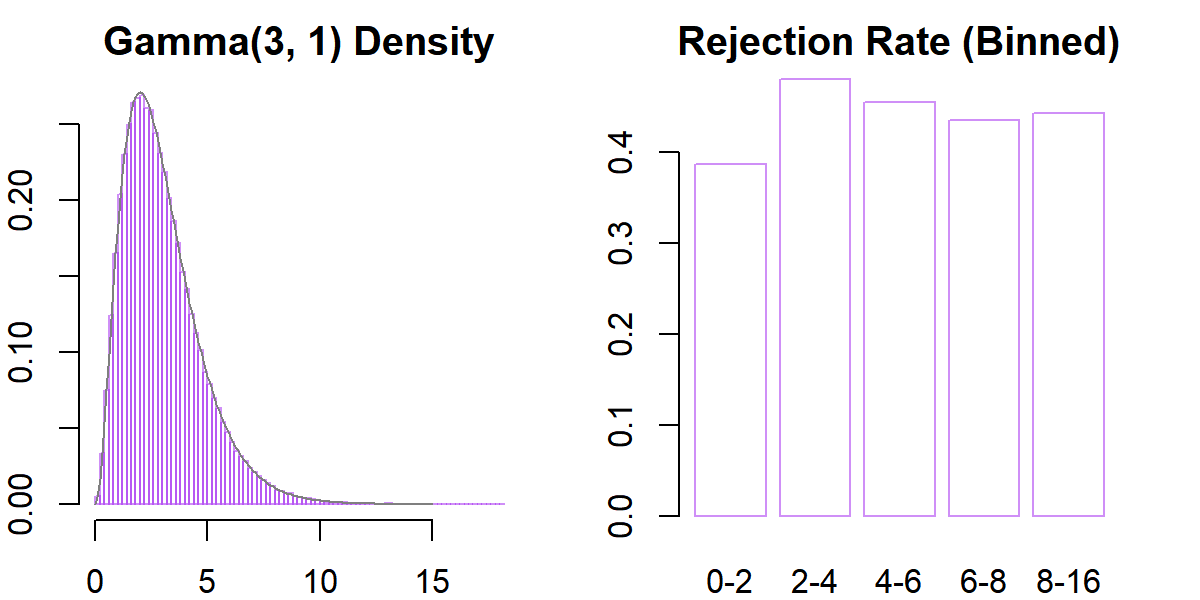