Prior distributions for scale parameters are often hard to choose. While, it is well-known that the inverse-Gamma distribution is the conditional conjugate prior for the variance of a Normal likelihood, the often used $\text{inverse-Gamma}(a,a)$ prior with small values of $a$, might generate some problems in studies with small sample sizes, as pointed out here. Indeed, the paper shows that the posterior is quite sensitive to the choice of $a$ if the number of data points is small; so, it is hardly “uninformative,” which is the whole purpose of using this prior distribution.

In a paper on variational approximations, Wand and colleagues noted that the half-t distribution can be expressed as the compound of inverse-Gamma distributions (see Result 5 in their paper). That is,

According to the authors, this result is “established in the literature, and straightforward to derive” (p. 855.), but I never came across it. So, let’s try to derive it ourselves. First, we consider the distribution of $\sigma^2$:

for $\sigma > 0$, which we recognize as the kernel of a half-t distribution with degrees of freedom parameter $\nu_0$ and scale parameter $\eta_0$.

The distributions seem to agree, although the results in the tails are quite unstable. Before we look into conditional conjugacy, notice that the half-t prior has as special cases the half-Normal distribution as $\nu_0 \rightarrow \infty$ and the half-Cauchy distribution when $\nu_0 = 1$, both with scale parameter $\eta_0$. Also, with $\nu_0 = -1$ it reduces to the improper uniform prior $p(\sigma) \propto 1$.

So far so good. Next, let us look at what happens if we use this prior on the standard deviation parameter in the following simple hierarchical model:

The posterior is proportional to

and the joint posterior, including $\omega$, is thus

The conditionals of $\omega$ and $\sigma$ are, respectively,

which both belong to the same family as their (conditional) priors.

For completeness, let us also derive the conditionals of the rest of the parameters:

The half-t distribution also naturally arises when using “parameter expansion” that is sometimes used to speed up the convergence of Gibbs samplers. We might expressed the parameter-expanded model as

where we assign the priors

For the parameter-expanded model, we have

showing that $\xi_\psi$ and $\varphi^2$ are conditionally independent. The full conditionals are given as

Thus, all priors of the parameter-expanded model are conditional conjugates, which makes sampling from the conditionals simple.

As the post has become already quite long, let us postpone the implementation of the Gibbs sampler and rather look at what a half-t prior would imply with respect to our beliefs regarding the data. First, we generate a dataset from the hierarchical model (without parameter expansion):

Next, we examine what datasets would be consistent with our prior beliefs regarding the parameters. This can be done by examining the prior predictive distribution:

So, why would we want to simulate from the prior predictive distribution? The benefits we gain are also quite stratighforward to understand: namely we see how strong or weak our priors actually are. One of the very strength of Bayesian analysis is the incorporation of prior information, by which we can draw our estimates towards more reasonable values and away from unrealistic parameter values (such as a logistic regression coefficient of, say, $50$.) By assigning less probability on unreasonable parameter values with the prior distribution, we can gain in precision—i.e, stronger priors will reduce the expected posterior variance. Of course, with large data and smoothly varying prior distributions, the information contained in the data will always dominate. Yet, in small and noisy datasets, a good prior might be very important. 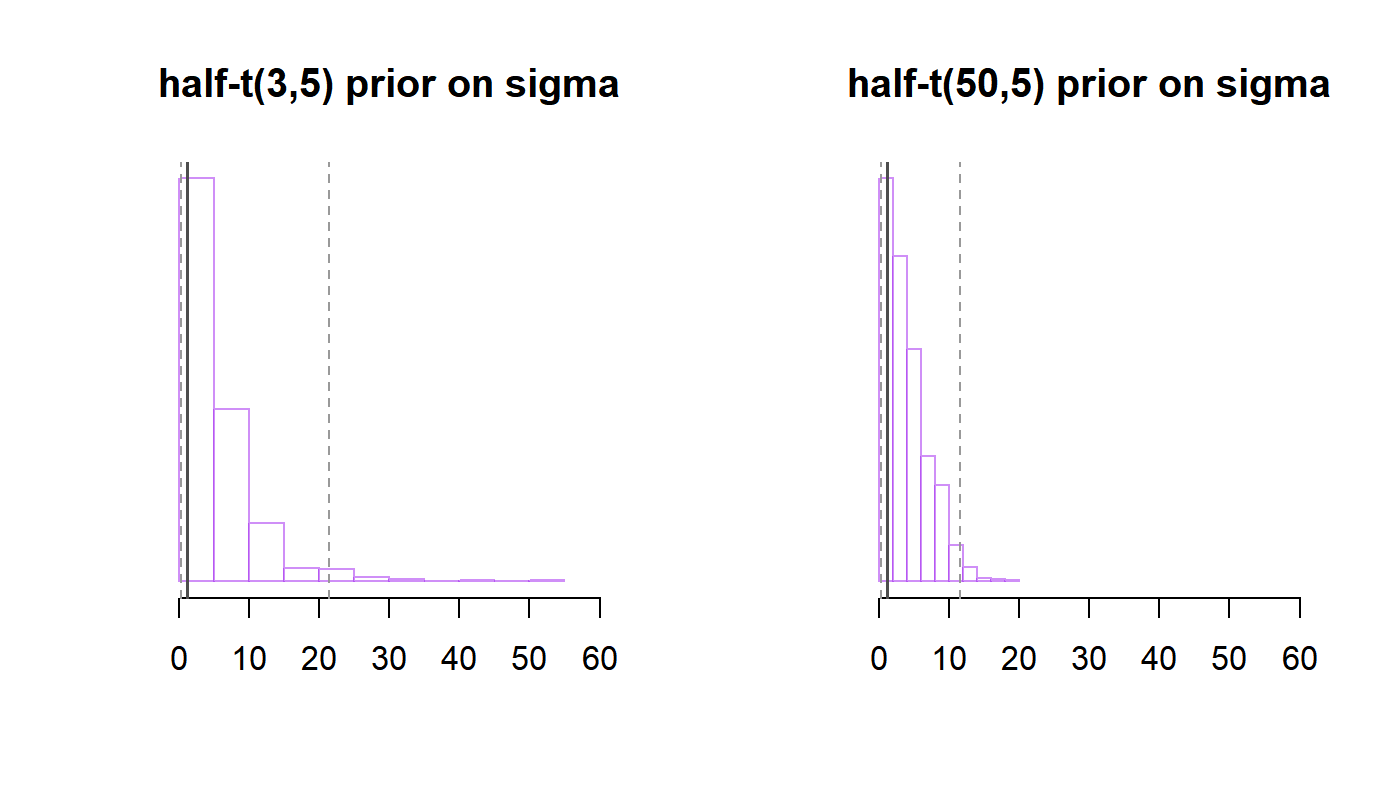 We see that the $\sigma \sim \text{half-t}(3,5)$ prior is consistent with values of $\text{sd}(\bar y_i)$ as large as 20, or even larger values, while the $\text{half-t}(50,5)$ prior puts more probability on smaller values of $\sigma$. Whether these priors are “reasonable” will depend on the specific application. Had we strong contextual knowledge that that $\sigma$ is quite small, say $\sigma < 2$, the $\text{half-t}(3,5)$ prior would be unnecessarily wide. Similarly, if you analyze a typical survey and find a logistic regression coefficient to be estimated $\beta \approx 50$ (assuming that the variance of the corresponding predictor is not too small), you’d check your code for errors, how missing values were coded, and so on, rather than taking this point estimate as the truth, because you know that this estimate is simply too large (and you’ll probably find that something was coded incorrectly). Thus, a prior that puts significant weight on $\beta = 50$, say $\beta \sim \text{Normal}(0, 50^2)$, might be considered to be unrealistically wide. To reiterate, in large datasets, quite any prior (even improper ones) will lead to similar conclusions (given that the posterior is proper, of course); but for smaller datasets or parameters for which the data contains only limited information, the choice of the prior can be quite important. Plotting out the implications of the prior via the prior predictive distribution can be very helpful in these situations.

Previous: Jacobian Adjustments in the Metropolis-Hastings Algorithm Next: Sampling Integers with RcppArmadillo